Alligators and Sharks
What Happens When They Meet?

Alligator Keeping an Eye on Us

Alligators live mostly in fresh water, but also live in brackish water. What many people don't know is the alligators that live in the coastal regions where the marsh and the Gulf of Mexico meet will make frequent trips directly into the saltwater Gulf. That's right. My uncle who lives near the Gulf in Louisiana has many photographs of alligators swimming in the Gulf and sunning themselves on beaches on the Gulf of Mexico. A river or marsh is always near-by.

It was reported after hurricane Katrina that a 12 ft alligator was seen swimming 40 miles off shore near an abandoned oil rig off the coast of Louisiana. Most likely he was blown out to sea during the storm or maybe he just got a wild hair and decided to see what was on the other side of the horizon.

Where freshwater rivers run into the Gulf, it has been said that alligators will ride the freshwater flow well past the beaches and are sometimes seen on sand bars or islands, etc.

What Happens When Alligators and Sharks Meet

Bull sharks breed and can live indefinitely in freshwater. They have been seen far up the Mississippi River and there are bull sharks swimming in a Golf Course pond in Florida. Apparently they got there during a flood and when the water receded they remained in the pond where the are to this day. However, it's primarily the young bull sharks (up to 4 ft long) that will live exclusively in brackish water. As they get larger they will migrate to the ocean side and only occasionally travel back into the shallow brackish areas, especially at night.

Alligators can get huge, to over 15 ft long. The unofficial record alligator was killed in Louisiana and  was said to be 19.2 ft long. It was shot on Marsh Island in Louisiana on January 2, 1890 by E.A. Mcllhenny.

There was some challenges to the 19 ft story. Some people say it was only just over 16 ft, but not 19. Only a photo is all that exists and no official measurement was made. But no matter, it is proof that alligators can be massive and have an appetite to match. 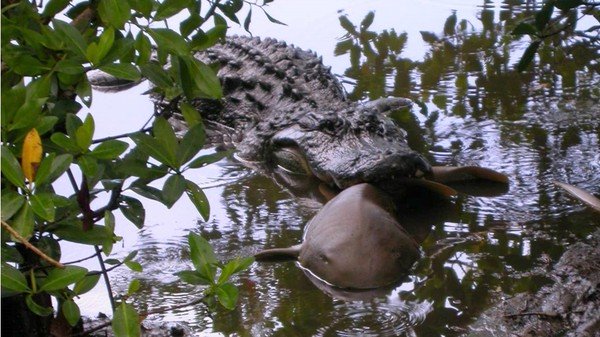 There is no doubt that adult alligators will eat smaller bull sharks, lemon sharks, and any other small shark that comes its way. It is a rare sight if you get to see this happening, but researchers say it happens a lot.

The 2006 photo above shows a 10 ft or 11 ft alligator eating a nurse shark. The photo was taken by a bird watcher on the Florida Gulf Coast where the ocean meets the brackish marsh. Then suddenly an huge alligator pops up and has a shark in its mouth.

The photo so inspired U.S. Fish and Wildlife researcher, James Nifong, that he actually began studying what happens when sharks and alligators meet and who wins this battle.

Turns out that alligators make frequent meals of sharks and stingrays, according to Nifong. The alligators seem especially fond of stingrays and have seen stingray barbs stuck in alligators, apparently gotten there while he was gobbling down his catch.

"It dispels the myth that (alligators) are only freshwater predators," said Nifong, a researcher with the Kansas Cooperative Fish and Wildlife Research Unit at Kansas State University. "They actually move between both habitats. I'm sure it's been going on for millions of years, but we're only now starting to account for it."

In the battle between alligators and sharks, Mr. Nifong believes if a large alligator meets a huge bull shark he believes the shark would probably win. Especially if the alligator is caught in deeper water out in the gulf. An alligators domain is in shallow water where he reigns as king. Even though an alligator has the strongest bite of any fish or animal in the world, I imagine a 10 ft bull shark would make a quick meal of a 10 ft alligator if found in the gulf.

You probably have little to fear from alligators and sharks. Always use common sense when kayak fishing in the marsh. That goes without saying. While surf fishing I wouldn't be too afraid an alligator would be lurking. I would be more afraid of stepping on a stingray or meeting a small shark when wade fishing. While alligators have attacked people, they are rare. Most shark attacks are said to be mistaken identity in the surf. It's a different story far from shore and then all bets are off. Still, when wading in the marsh or in the Gulf where marsh is very close-by, such as across the road, etc. it would be wise to scan the area quickly then start fishing. Always be aware of your surroundings.

For more information on alligators and sharks, Click Here

Alligators and Sharks back to Hammerhead Kayak Supply Home