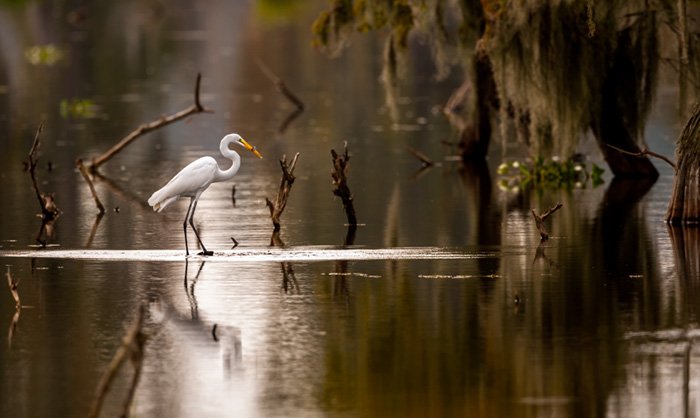 Great Egret in a Louisiana Swamp

I was born and raised in Lake Charles, LA. As a boy, I had no idea that these Cajun words were difficult for others to say. It was what I grew up with. Louisiana has a french and Indian (native American) history and many names are in french as well as Native Indian words.

While I have lost the accent, for the most part, I do feel if you visit Louisiana you won't get so many stares if you can say the words correctly. Oh, the locals know what you mean if you say it incorrectly, but it dispels all doubt that you "ain't from around heeya".

Here are a few Cajun Words to practice on

New Orleans - Probably the most well-known city in Louisiana, many people who visit come here. Foreigners often pronounce this New Ar-leens, very distinctly pronounced as two words. The correct way is to say it as, first the local way, "Naw-lens" (one word not two) or "New Aw-lens" said as one word.

Vieux Carre - If in New Orleans, you may visit the French Quarter. It is a popular tourist attraction and one you will enjoy. At night it is very different than the day. Another name for the French Quarter is Vieux Carre and is pronounced "Voo-cah-ray". They will put a voo doo spell on you if you pronounce it the wrong way.

LaFourche Parish - A "parish" is the Cajun word for county. You have to pass through Lafourche parish to get to Grand Isle and other fine fishing spots. It is named after the Bayou running through it and is said as, "Lah-Foosh".

Plaquemine - This is a town south of Baton Rouge on the Mississippi River. It is actually an Indian name (not all names are French) but just as difficult to pronounce and is said as, "Plak-ah-min".

Natchitoches - A small town in Southwest Louisiana is called Natchitoches named after the local Indian Tribe. I was born in Lake Charles so I heard this town mentioned a lot. It is pronounced "Nack-uh-dish". They have a lot of celebrations there. It was established in 1714 and is referred to as the oldest town in the Louisiana Purchase. 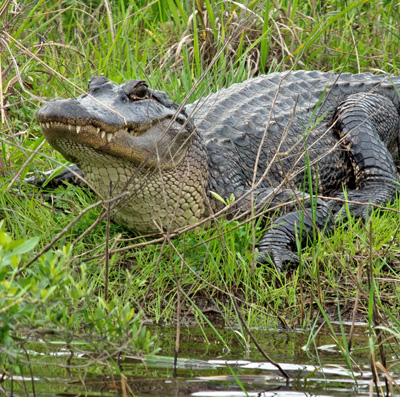 Alligator on the Bank of a Bayou

Gueydon - This is a town in Southern Louisiana just north of the White Lake Wetland Conservation Area. We would pass though this town when doing the tour through the Sabine National Wildlide Refuge below Lake Charles and going through Grand Chenier. If you have never been though the Wildlife area you should. My Grandfather died building a bridge in Grand Chenier (pronounced Sha-near, meaning a raised spot with oak trees in a swamp or marsh).

Bayou - You may be fishing a lot of bayous out there. It is pronounced "by-you" and refers to any smaller body of water in low lying areas.

Atchafalaya - This is the heart of Cajun Country in south central Louisiana. It possesses the longest continuous bridge in the world running across this swampy basin. This offers great kayak fishing, bird watching, air boat rides and viewing alligators.

It is an Indian word meaning "long river" and is pronounced, "Uh-cha-fuh-lie-uh".

Pirogue: - It is pronounced "Pee-row". Years ago a pirogue was a boat made from a single cyprus log. It was basically a dug-out flat bottom boat that used a push pole to move the boat though the bayou. To do this a person stood in the boat while using the pole to push forward or backwards. However, now days there are few pirogues left, but the ones that are there are modern flat-bottom boats.

Hebert - Most people think they know how to pronounce this word, but in Louisiana they would be wrong. It is pronounced, "Ay-bear". People from Louisiana who have the last name Hebert, pronounce their name as "ay-bear". Ha! Take that New York! 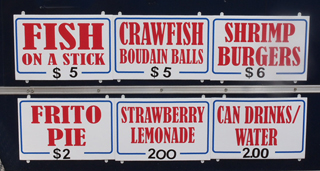 Crawfish - Yankees say it as "cray-fish". But dems fight'in words if you say it like that. It is pronounced like it is spelled, craw-fish.

Pralines - You may hear a lot about "pralines", a local candy in Louisiana. Again, yankees call it "pray-leens", but you will be tared and feathered for saying it like that, it is pronounced, Praw-leens"

Beignets - You can't go to New Orleans especially without trying a Beignet. When asking for one, make sure you pronounce it as, "bin-yay".

File Gumbo - Most people know it from a country music song, Jambalaya, from Hank Williams. The File is made from ground sassafras leaves and is pronounced, "fee-lay". Although gumbo is a popular dish and if you haven't had it, you are missing out. File Gumbo is popular in Creole recipes.

Boudin - This is sausage or deep fried balls stuffed with pork meat, rice and seasonings. You can't go to Louisiana without eating this and it is pronounced as, "boo-dan". A lot of people in Missouri ask me what the name of that sausage is knowing I am from there. The word Boudin is misspelled on the sign. It doesn't have an "a" in it.

Cochon de Lait - If you stick around long enough and get to know some cajun locals, you may be asked to attend a Cochon De Lait. No, you will not be fed to alligators, but you will eat a slow roasted pig. It is a party with drinking and lots of laughing and fun. Pronounced, "coo-shon-dee-lay".

Lagniappe - This is a word that means a gift given to you or given as an extra. Like to get a souvenir or a small gift for visiting. You may hear it used a lot depending on where you are. It is pronounced, "lan-yap".

Gris-Gris - The farther south in Louisiana you go the more you will see evidence of Voo-Doo. This is especially if you are familiar with important colors and signs in the voo-doo culture. This term came from Africa and is concerning a Voo-Doo spell or charm. It is pronounced, "Gree-Gree".

Coonass - This is a very common cajun word used by one cajun to another. It is usually a term of endearment and does NOT mean you are a racoon's ass nor is it usually applied as an insult. My aunt used to call me this all the time and it is a synonym for Cajun. Some outsiders or those who relocate here find it offensive, but many Cajuns refer to themselves as a coonass.

There are many, many more cajun words, but this is a start. I hope to see you in my home state fishing, "The Sportsman's Paradise" and maybe we can meet up for a cochon de lait.