~~ Know Your Kayak Visibility ~~
Can Other Boaters Really See You?? 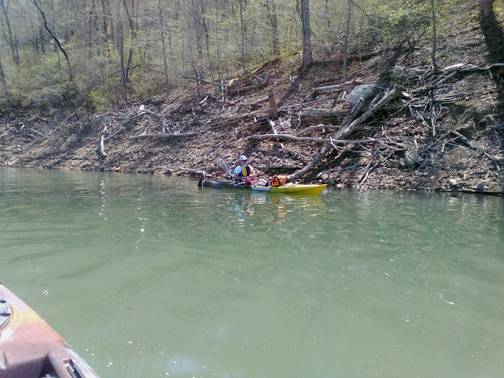 Kayak visibility is something most people never think about, but they  should. Kayak fishing is a very popular sport with thousands of new kayaks being sold each year. They also come in attractive colors including orange, red, and even multi-colors from pinks to whites.

Yet on the water, especially on larger lakes, the Gulf or ocean and even larger rivers, kayaks are not as visible as you might think they are.

You may be thinking, wait a minute, I have this red kayak that is clearly visible from anyone near by. That's right, the key words are "near by". I have spent hours on the water and believe me, past 100 yards darker colored kayaks begin to fade to grey  and then to dark grey. If the shoreline or trees are behind the kayak, they blend into the background and are almost impossible to see at distances.

The photo above shows the owner of Hammerhead Kayak Supply while fishing from his 14.8' Viking Profish Reload. At 30 yards from the camera he is still visible, but his kayak visibility goes down greatly at greater distances. At 100 yards his kayak begins to blend into the background. 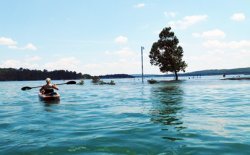 My wife has a large 13.5 ft Wilderness Systems Ride Kayak. The kayak's color is orange, black, grey and white and is shown in the photo to the right. You can't see the various colors in the photo due to distance. All you can see is a dark color. She sometimes uses a white bladed paddle not shown in the photo. When fishing she likes to use live bait and will fish in one spot while I prefer to move down the shoreline casting for bass. I will paddle a few hundred yards down the shoreline and look back. While I  know exactly where she is I can see nothing. She has blended completely into the background and if I can see her kayak at all it is dark grey, almost black in color.  The white paddles are often the first thing I see.

My kayak is a black and yellow Viking Profish Reload kayak. I will often troll along steep sided rocky banks for smallmouth bass. In the Ozark mountains where I live, the lakes are lined with thick hardwood forests. In summer with the rocks and the forests in my background, the kayak disappears very quickly. It can be hard to see at distances beyond 100 yards.

Remember, even if people know where you are and are looking for you yet you are hard to spot, imagine a passing boat that is not expecting you to be there. They may not see you until the last seconds.

Why It's Important to Know Your Kayak Visibility

If I know I begin to lose sight of some kayaks at 100 yards, you can rest assured that other boaters will not be able to see you either. Some of the places I fish requires me to paddle to the opposite bank from where I put in. This means I am moving in open water perpendicular to the path of larger motor boats. Boats don't usually expect to see kayaks in the middle of a lake.

The lakes I fish in southern Missouri and northern Arkansas are large and we share the lake with larger speed boats, bass boats, jet skis, and many other types of crafts. A boat traveling at 40 miles per hour can cover a 100 yards pretty quickly. If the driver turns his head to scope out a babe in a bikini he can slam into your kayak in a matter of seconds.

If the driver of the faster boat does see you at a 100 yards, by the time he reacts and throttles down the engine he may have traveled 25 more yards. Plus, as the boat is quickly throttled down,  the forward wake he produces can be twice as large as the one he would have produced if he kept going by at a higher speed. Those large wakes can capsize a boat if you are new to the sport and are caught off guard. If you are inexperienced with handling wakes, you will need to quickly position your boat so the bow is pointed toward the incoming wake. Practice in handling wakes from all boat positions in relation to the wake is essential. Start by practicing on smaller waves. As you gain experience slowly place your boat more parallel to the waves as you begin to see how the kayak reacts.

Every year around the country there are accidents involving kayaks. In a few  the owner is never found or is found dead even though he may have had a life jacket on or at least one was with him in the kayak. In these tragic situations we can only assume what may have happened. Low kayak visibility may be a contributor. Possibly a larger boat swamping the kayak could have been the cause in a few cases. The driver of the larger boat may have never known the kayak was there before and after the kayak was swamped.

Make yourself as visible as possible.

Wear white or bright colored clothing to help improve kayak visibility. Use white or light bladed paddles. While black is the most popular, they cannot be seen well at distances. Install an orange whip safety flag on your kayak. (We sell them.) At night, have lights on your kayak and use reflective tape. You are asking for trouble if you kayak at night without any kind of light. Bright colored clothing or bright kayaks are next to useless at night.

Using Motorcyles as an Example

I have a Honda Goldwing. Even though we share the road with other vehicles, we learned that you cannot assume other drivers will see you. It is a known fact that drivers have trained their minds to see cars and become motorcycle blind even when looking directly at them. Most Motorcycle riders are aware of this.  Two of my best friends were recently killed when a car pulled into the path of their motorcycle. The lady who hit them looked in their direction but claims she never saw them when she pulled in front of them from a cross street. The bike hit the car just in front of the driver's side door.  The motorcycle was so close to the car when she pulled in front of them my friends didn't even have time to put on a brake. They were that close to the car yet the other driver never saw them. My friends died at the scene. 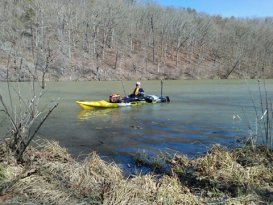 It is the same with kayaks. People are expecting to see speed boats, jet skis, pontoon boats, boat trails and wakes, etc. They are not looking for a small boat or paddleboard sitting just a few inches above the water and especially when the kayak color helps it to  fade into the background. If you have a darker kayak, kayak visibility becomes more important.

If you can only take one thing away after reading this article, let it be that you can never assume larger boats can and will see you and you must act accordingly. Don't take kayak visibility for granted. It may save your life one day.

Kayak visibility is almost never considered. Therefore, this is designed to make you aware that other boats may not see you and it is your responsibility to make yourself as visible as possible.